New puppies, cute babies on pattern photos, and LOTS of discussion and conjecture about button bands, zippers, and grosgrain ribbon. Come join the community on Ravelry or become a patron and support the show on our Patreon Page.

Save the Date for the Two Ewes Washington Coast Meet-up at String Theory Yarn and Fiber in Seabrook, Washington, September 20-22.

Here is an RSVP form so you can let us know if you’re coming! We want to make sure we have enough goodie bags for all.

Find lodging for the weekend at Seabrook or in nearby Pacific Beach or Ocean Shores. Or join us for a day if you are nearby!  Thank you to Jean at String Theory Yarn and Fiber for helping us put on this fun event!

Kim has a new puppy! It's a Logatto Romagnolo named Orkney. He's so cute and Marsha is enjoying being an auntie to a new puppy! 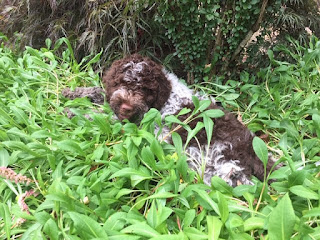 I finished the Lace Market T-shirt by Marie Green using Schoppel-Wolle El Linio several weeks ago. The neckline was too big and yesterday I finally reknit it. Fits perfectly! 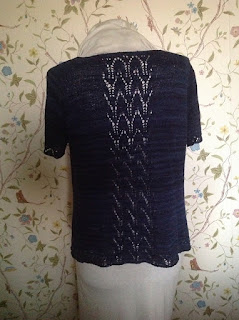 The Schoppel-Wolle Das Paar socks are finished and they match just as promised. 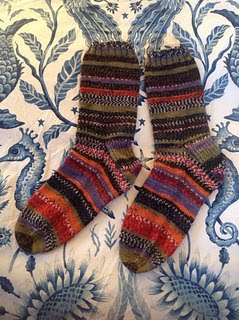 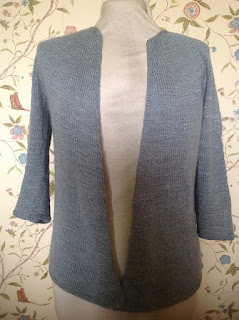 I also cast on another pair of vanilla socks for my brother. Using Schahenmayr Regia Design Line by Arne & Carlos. I’m going to use Knitted Wit Smarties for the toes and heels.

I recently ripped out the Neskowin Shell by Kay Hopkins. I changed her pattern and it didn’t work. Too heavy and too short. The yarn is Debbie Bliss Juliet and I am about to cast on the Lounging Top by Joji Locatelli.

I’m making a hat for a friend that is going to be working in Antarctica. I plan to make 1898 Hat by Kristine Byrnes with worsted weight Hazel Knits Cadence in the colorway Woodland. The pattern is on the Seamen’s Church Institute: Christmas at Sea. This seemed to be the perfect pattern for an adventurer and yarn is from Seattle.

I swatched for Mariannes cardigan by Trine Bertelsen. The pattern has a crochet yoke, button band, and sleeve edging. I will modify it to be a pullover. I’ll be using Blue Heron Egyptian Mercerized Cotton spirit yarn from Tracy (littletownknitter).

Billions of baby socks! Well, maybe not billions. Six pairs are finished and I have another pair on the needles. 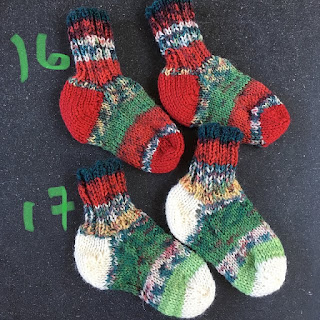 Yarngirl52 (Debbie) asked about adding a zipper, adding a shoulder button band for a toddler sweater, and finishing a button band. Should you use grosgrain ribbon or not; backer buttons or not.

I haven’t ever done a steeked sweater, but I steeked for the Clover, Bee, and Revery pillow. The pillow was knit in the round with an extra 5 or 7 stitches that were where it was cut and folded over to create the left and right edges of the pillow top. I did a crocheted steek where I crocheted up each edge before cutting. If I ever made another Cowichan-style sweater I think I would do it in the round and then steek it to put in the zipper. That way you avoid colorwork while purling.

I added a zipper instead of a button band to the Mielie vest that I made (pattern by Hilary Smith Callis). I made the button bands a little wider because I liked that look. I also changed the order of putting on the collar and button band so I could fold the collar down over the top edge of the zipper. I sewed the zipper in by hand and I actually just used yarn to do it. The zipper on the Orcas Run was sewn by hand with sewing thread. I pinned it on, zipped the zipper up to adjust the pinning if needed, then unzipped it again and made small stitches all around the edge of the zipper.

What about adding a shoulder button band to a toddler sweater that doesn’t have one? Bluebell Pullover doesn’t have a shoulder button band but has the envelope neckline that onesies have. To put a button band on a bottom up sweater would be straightforward. Instead of joining at the shoulders, just bind off (to provide structure) and then pick up for the button bands. One will need to have button holes put into it. I think I’d make it the front one, but it doesn’t really matter I don’t think. Putting a button band on a top down toddler sweater would be more tricky and would really depend on the construction of the sweater.

Another trick I like when I want to alter a pattern is to find a pattern with the thing I want to add and either make it first to figure out the construction, or read through it and see if I can visualize how to make the changes I want in the original sweater. For example Diggory from Berroco is an example. It has the neckline with button bands and could serve as a great model of what to do. Besides, the baby in the pattern photo couldn't be cuter. Go take a look--we promise it will make you smile!

Marsha found some resources about adding grosgrain ribbon to the button bands of a sweater. Neither of us have ever done this, but we spend a lot of time speculating and decide to experiment with the technique on two of our sweaters.

Tips for adding ribbon to a sweater button band by Olive Knits.

Adding a ribbon backing to your knit button band by Ms. Cleaver