Marsha participated in the large Pacific Northwest LYS Tour 2015 .  The tour was five days and 26 yarn shops from Bellingham to Kent.  Marsha had limited time so picked four shops she had never visited.
Her first day she visited Tolt Yarn and Wool in Carnation. This shop specializes in local yarns. Marsha bought Tracie Too in Autumn Rust from Imperial Yarn and a worsted yarn in Sage Green from Thirteen Mile Lamb and Wool Co.

She also went to Quintessential Knits in Duvall where she bought a skein of Yarn Pirate merino in the color way Spooky.

The second day she went to Maker's Mercantile in Kent. This is a nice shop that had not just yarn, but also spinning, felting, rug hooking supplies, and a large selection of buttons. Having Rylie Cakes inside the shop was a huge surprise and treat.

Marsha bought this shaw pattern called Modular Shawl with Ruffled Edges and is thinking it would be fun to dye the yarn for this project.

Marsha's next stop was The Knittery in Renton. This is a cute shop with a large selection of yarns suitable for baby knits. Marsha won a door prize of a Lantern Moon basket, a LYS Tour tote, and a skein of Serenity Tweed.
Kelly is continuing her work on her Grape Vanilla sweater (using the Cherry Vanilla pattern by Thea Coleman . 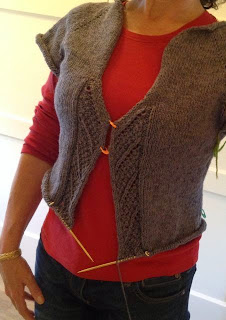 There are also a couple of pairs of socks that get an occasional row.  Speaking of occasional rows, her SF Giants cowl, I Don't Care if I Never Get Back, is looking great!  Two rows get added after each game so this is a fun way to commemorate the season.  This project uses the Crackerjack cowl recipe by Stacey Simpson Duke. 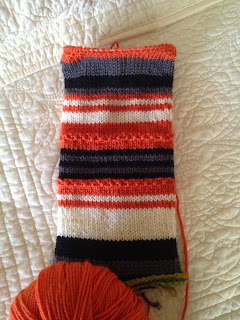 Kelly's bees have been in the hive for about a month.  What an obsession they have become!


Some other links that came up in our conversation:
KnitSpinFarm Podcast by Joanna Spring who has Clun Forest sheep.  These are one of the breeds of sheep that Marsha spoke about.
Nuno Felt is the name of the felting that is done with fabric.  Here is a tutorial website with lots of photos of projects.

We had a winner in our giveaway of the book Wanderlust: 46 Modern Knits for Bohemian Style, by Tanis Gray, published by Interweave/F+W.  Listen to find out who the winner was! Thanks to all who entered the contest in our Ravelry Group!


Check out this episode!