Marsha and Kelly both finished knitting their sweaters and both are big wins!  (At recording time we both had a little left to go, but now that the episode is published we are finished).  Marsha's Blue Juno sweater fits even better than she thought it would.
Kelly's Purple Cherry Vanilla sweater is the perfect sweatshirt alternative and used yarn from her extensive stash of rescued weaving cones.  Double win! 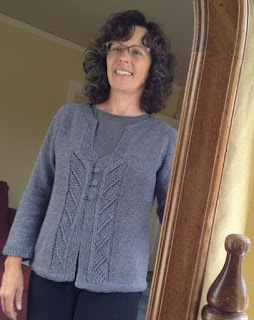 Marsha is planning to finish her son's tricolor socks before the month of July is over.  Inspired by others in the Warmth of Summer KAL, Marsha has started a Wispy Willow Cardigan using a spring green CoBaSi yarn from Hi-Koo.  She has also been busy spinning some of the CVM fleece that Kelly gave her to try, and is making plans to wash and card the fleece that she got from The Black Sheep Gathering.
Kelly has also been spinning a bit since returning from her trip and has some plans for Tour de Fleece. But mostly she has been finishing up current projects that she brought with her--a Rikke hat, for example. 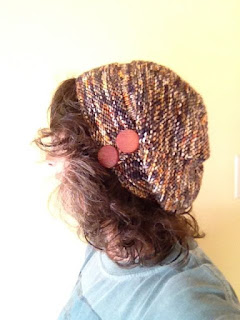 Kelly also explains why her decision to start beekeeping with foundationless frames has made the steep beekeeping learning curve even more steep.

The Two Ewes review a wonderful first book by designer Corrina Ferguson.  Review copies were kindly provided by the publisher, Interweave/F+W. Interweave also provided this information about the book:
Knitting is not just for cold and snowy climates! For anyone who has ever stopped to wonder what knitters in the South are wearing—and knitting—for the changing seasons, Florida designer Corrina Ferguson has set out to show us in her new book, Warm Days, Cool Knits: Lighter Designs for Every Season (Interweave/F+W; $24.99; June 2015).
“In the South we love to knit. And we want to knit pretty wearable things, not just accessories and household decorations,” explains Corrina. “That’s why I created this collection of patterns to showcase the knitted seasons of the South, with projects that are fitting for any climate.” 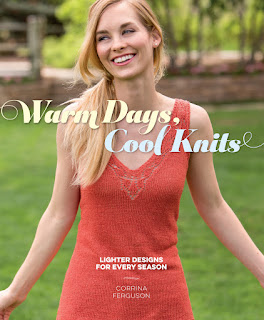 Marsha and Kelly had almost an identical list of favorites from the book, including the tank shown on the book's cover.  Kelly has started swatching already for one of the other tops in the book.  Another big win!  This book is full of great knitting patterns for warmer coastal climates like the Salinas and Seattle areas--not just the south.
A copy of this wonderful book is awarded as one of the two prizes for the Warmth of Summer Knit Along that just ended. Check the episode to hear the winners.

Check out this episode!