This is the first of three parts detailing Kelly's fiber adventures while she is in DC as an E. Kika de la Garza Fellow with the USDA. She talks about what she is knitting during her travels, and she reviews the the current exhibit at the Textile Museum associated with The George Washington University. She also talks about textiles at the Smithsonian Museum of American History. Due to length...


In this episode Kelly and Marsha give updates on finished projects, ongoing projects, and projects that are in the the planning stages. They also talk about Marsha's spinning class, crochet, Kelly's new beekeeping adventure, and her upcoming fellowship in Washington DC.

Kelly has one sleeve done and the other moving along on the purple sweater she is making.  The project uses the Cherry Vanillap...

Marsha participated in the large Pacific Northwest LYS Tour 2015 .  The tour was five days and 26 yarn shops from Bellingham to Kent.  Marsha had limited time so picked four shops she had never visited.
Her first day she visited Tolt Yarn and Wool in Carnation. This shop specializes in local yarns. Marsha bought Tracie Too in Autumn Rust from Imperial Yarn and a worsted yarn in Sage Green from T...

In this episode we give an update on the projects we are working on, or in Kelly's case, projects she is not working on. Keep reading to learn why. We also review the new pattern book Wanderlust: 46 Modern Knits for Bohemian Style  by Tanis Gray, published in March 2015 by Interweave/F+W. 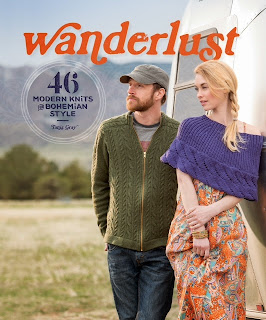 In this episode Marsha and Kelly talk about the fun they had at the Northern California Knitters Retreat (#NoCKRs on Instagram for more photos). The retreat was held at the St. Francis Retreat Center.  We had such a great time!  Thank you to the organizers, and thanks to Duren Dyeworks and Kicks and Giggles for donating the door prizes that we won.  Thanks also to Dizzy Blonde Studios, Miss Babs,
A...